Entertainment Weekly, or the Bible as it’s called in my house, recently listed the Top 100 Greatest Characters of the Last Twenty Years.

As its title indicates, Entertainment Weekly concerns itself with entertainment generally: movies, television, music, the interwebs, theater, and, yep, books.  Perhaps not surprisingly, the bulk of their hundred greatest characters were known from movies and TV.  Omar Little, Cosmo Kramer, Buffy Summers, Lorelai and Rory Gilmore, Homer Simpson.  Hard to argue with most of the choices.

The list did acknowledge a few literary characters, but most of those were discussed in terms of their dual identities, existing both on the page and in film, such as Dexter Morgan, Bridget Jones, and Harry Potter.

But as I perused the article, I was struck by how many of the TV and movie characters actually originated in novels and short stories.  My first instinct was critical.  Why, I asked, did the magazine make only brief mention of the original works while reserving celebration for the filmed or televised version of the character?  Why didn’t EW discuss both the literary and films versions, as the article did, for example, with Bridget Jones?

I realized, however, that as much as we readers like to say that adaptations “destroy” our favorite books, sometimes actors, directors, and screenwriters create something entirely new from literary inspiration, or at least sufficiently unique to take on new life.  When I think of Red from the Shawshank Redemption and Annie Wilkes from Misery (who both made the list), I think of Morgan Freeman and Kathy Bates, not the works of Stephen King in which they first appeared.

I confess that I had forgotten that some of my favorite characters had literary predecessors.  I can’t imagine Tracy Flick, for example, apart from Reese Witherspoon’s interpretation of her.

Forrest Gump, in my mind, looks and sounds forever like Tom Hanks.

And, with all due respect to Candace Bushnell, when most of us hear Carrie Bradshaw, we think (for better or worse) of TV Carrie, not book Carrie. 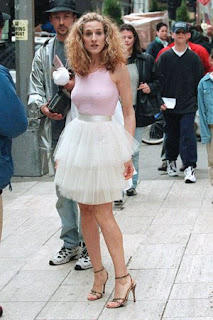 Some adaptations stray so far from their source material as to be unrecognizable.  I’m told, for example, that the novel upon which Up in the Air was based did not have either of the two female characters who taught George Clooney so much about life.  Many people did not realize that the film O Brother, Where Art Though? was based on Homer’s Odyssey until the Academy nominated the screenplay for best adaptation.  In our own genre, I can’t be the only Michael Connelly reader who was, shall we say, surprised at filmmaker Clint Eastwood’s take on the character Buddy.

Two questions for discussion, one with subparts:

1) Who are your favorite literary characters of the last twenty years?

2) And which translations of literary characters to TV or film have been most horrific, accurate, or even improvements on the originals?