Thanks to some truly memorable writing by a guy called Thomas Harris, and some wicked good acting by a dude called Anthony Hopkins, many of us picture this guy when we think “serial killer.”

Or if we take our models from the real world, we might conjure up images of these fellows. The paradigmatic “serial killer,” as we tend to use that term, is, by definition, both evil and genius. We know he is evil because he not only takes life, but does so repeatedly and often methodically. We know he must be genius because he is able to get away with his acts, repeatedly and methodically. Ted Bundy convinced grown women to get in a car with him. Charles Manson controlled his own cult. The Zodiac Killer was never caught. And Hannibal Lecter? Well, he managed to outwit even Clarice Starling. How wiley is that?

But I spent some time last week thinking about our fascination with the particular type of romanticized evil epitomized by the pop culture figure of the serial killer. My thoughts were first sparked by this season’s insanely delicious performance by John Lithgow on Dexter, based on the groundbreaking novels by Jeff Lindsay. Dexter himself was a terrific twist on the usual serial killer depiction: He only kills people who deserve it. And, in some ways, the killer portrayed by Lithgow checks off all the usual boxes: methodical, intelligent, manipulative – check, check, and check.

Except … he’s also married. And he sings loudly and earnestly at church. And he wears goofy shirts. And he gets angry when a new acquaintance lingers too long near his dead sister’s ashes. And he totally wigs out when he hits a deer with his creepy kidnapper van. And he looks like this.

Not wiley. Not genius. Just a little off. And kind of dorky.

I was also thinking about serial killers when I dusted off an old war story for my criminal law students this week. When I was a young Deputy District Attorney in Portland, I prosecuted a guy called Sebastian Shaw. The facts? He threw an onion at his sister with such force that it, in her words to the police, “exploded.” (No offense to my siblings, but you all did way worse to me, and I never called the cops.)

In all honesty, I might have only pushed the necessary papers on the case had it not been for persistent phone calls from a friend of the defendant’s family (coincidentally, a writer you’ve probably heard of). She warned me and anyone who would listen that Shaw was dangerous. We had to do something. To the best of my recollection, Shaw was convicted of assault and received what was probably a typical sentence for the crime of injuring another person.

I moved on to the next case (or hundreds) and never thought of it again until the First Assistant called several months later, asking for information about a guy called Sebastian Shaw. “Oh yeah,” I said, “the exploding onion case.” I could tell from the First Assistant’s response that my levity was misplaced. (I know. It probably still is.)

You see, Shaw had been stopped by police in a car that happened to have the following items in the trunk: a blindfold, plastic zip ties, duct tape, mace, a knife, a lead weight in the end of a sock, ski masks, latex gloves, and pornographic magazines. That’s all the police needed to know to conclude that Shaw was up to no good. But it wasn’t proof beyond a reasonable doubt.

Fortunately, Shaw smoked. And littered. After he flicked a cigarette butt to the ground outside a grocery store, police linked him through DNA evidence to a rape and two unsolved murders. The last time I checked, Shaw claimed to have killed ten or fifteen people, and law enforcement continued to connect him to bodies.

It wasn’t until after he’d been identified as a serial rapist and murderer that all the stories started to come together. The threat to his roommate’s life during an argument about the dishes. The eerie statements that had gotten him suspended from his cable company job. The outburst at his co-workers when he was a security guard. And don’t forget about the exploding onion.

All that time, all those stories. Apparently his family suspected something was deeply wrong. But I imagine that, to the people who had only superficial encounters with him, Sebastian Shaw seemed sad. Bizarre. Pathetic. Lonely. A loser.

Not evil. Not wiley. Not genius.

Now police in Cleveland have found eleven bodies in the home of this man, who had lived with his stepmother and did not drive. Sad. Pathetic. Not wiley or genius.

All of these stories were bouncing against each other in the pinball machine I call my brain when I asked my Facebook pals what I should blog about. I got some great suggestions that I may use later, but one stood out when my friend, Steve, said, “How about the banality of evil?”

It shouldn’t have taken Steve’s suggestion for me to tie John Lithgow to Sebastian Shaw to Anthony Sowell in Cleveland. I grew up in Wichita, Kansas, terrified of a murderer who called himself BTK. Bind. Torture. Kill. Thirty years without capture. Evil. Wiley. Genius.

But then they caught him because he was stupid enough to send police a CD-rom initialized with his full name. In his job enforcing low-level code violations in his tiny little town, he was known to measure grass with a ruler. Not wiley. Not genius. Just a sad loser. But still evil to the core. 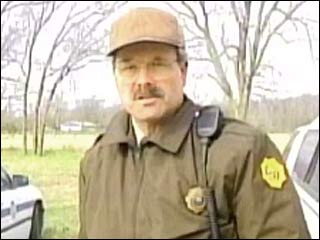 So if evil doesn’t usually come in a super-smart, fava-bean eating package, why are we so fascinated with the prevailing paradigm? Maybe it’s simply because characters like Hannibal Lecter make for much better fiction than overweight landscaping police. But I suspect our preferences run deeper. We want to believe that evil is both recognizable and rare, not the nondescript guy in the next office.

If you’re fascinated by real-life serial killers, which ones fascinate you and why? And, as a reader (and perhaps writer), how do you respond to fictional portrayals of evil? Which ones stick with you?